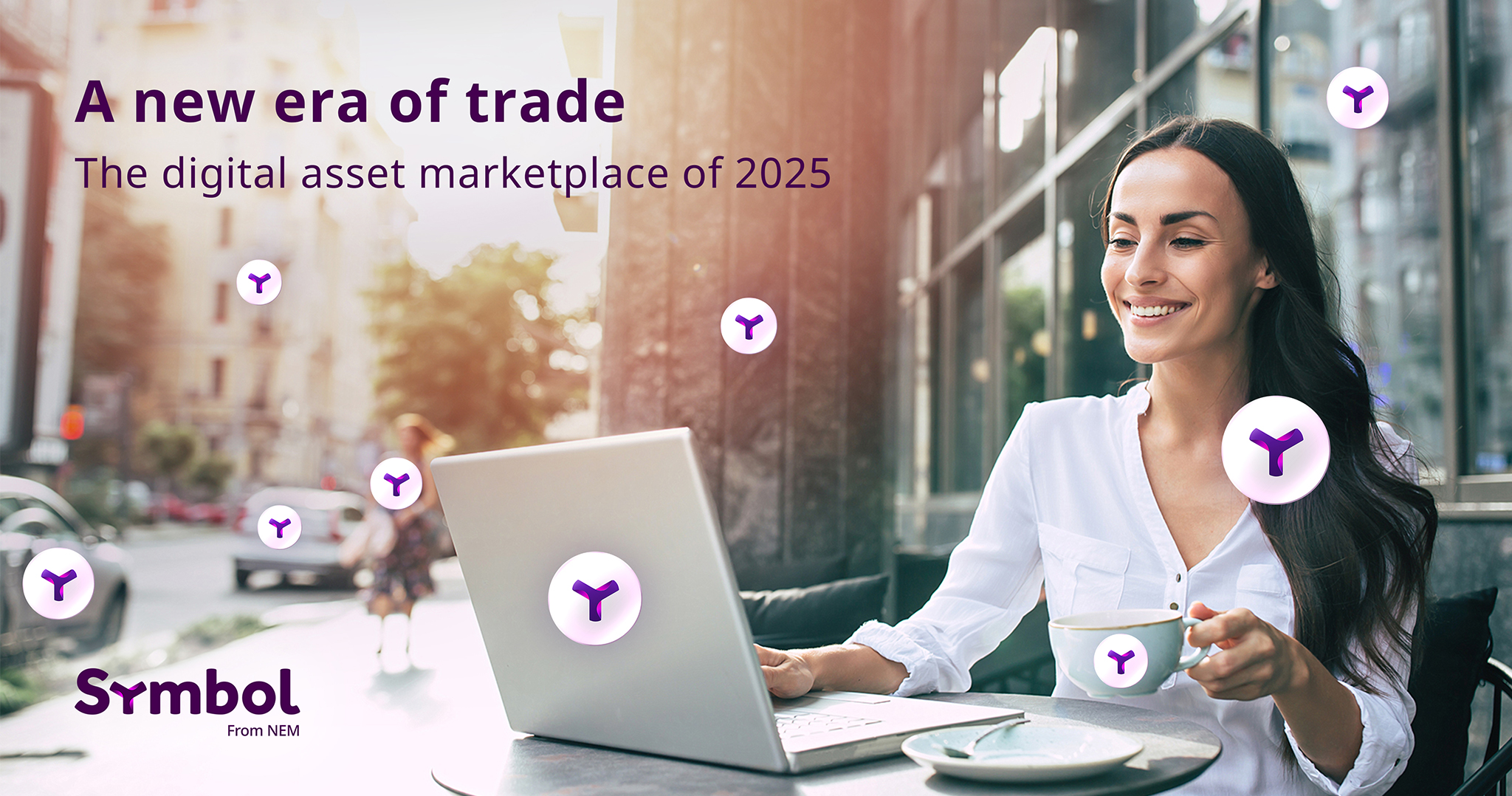 2025 will be a world of tokenized assets

By 2025, token markets will have become more or less completely interconnected and will touch nearly every commercial industry. This mixture of centralized and decentralized networked marketplaces will have a worldwide impact that’s difficult to fully comprehend, even as we approach from only a few years away. The one thing we can say for sure is that it will be the beginning of new commerce channels, new ways of trading, and potentially new ways of creating value in ways never seen before.

The technology is nearly there, the regulatory frameworks are being worked on, and more than ever, demand is there. And In all these areas, Symbol is leading the way.

Imagine anything of value can be tracked and ownership recorded with a digital token. Now imagine these tokens are traded online, at any time, to whomever values them the most.

Imagine foreign currencies, equities, stocks, IP, expertise, ideas and all their derivative assets can be freely traded for any of these things using digital tokens.

Think about earning hotel loyalty points or credit card rewards and being able to trade them online for unrelated services like cloud computing or data storage. Imagine that video game companies reward their players with in-game currency that can be traded for currency in any other game, or for fiat money to be used to pay for real world products and services.

Envision a future where bundles of rights can be tracked with tokens – such as the right to collect rental payments on an apartment, the right to royalty payments for your music, and even carbon credits. These bundles of claims can be aggregated into tokens that automatically give a portion of these diversified future income streams to any holder.

Individuals will start to take control of their own data, such as web browsing history, social media, health, and geolocation. Instead of allowing large companies to harvest and monetize it, each individual can start to choose what data to share and can capture that monetization for themselves.

The ability to create and realise value from any asset will be a game changer and blockchain is the key to unlocking this shift. Simply put, asset digitisation and tokenisation will drive real world adoption of blockchain and touch all our lives.

A few things currently stand in the way of this picture. Foremost among them is the tangle of regulatory frameworks. Each country has laws about who is allowed to own various types of investments and properties, and investors are usually subject to KYC (Know Your Customer) and AML (Anti Money Laundering) identification regulations.

Solving these issues is an intense focus for many companies. Companies like Polymath and Propine are focused on STOs (Security Token Offerings) which allow companies and individuals to sell shares and raise capital on token marketplaces. Bankera is a company that provides banking services using digital tokens. Bank of Lithuania, amongst other Central Banks, has its first digital collector’s coin – LBCoin – as it moves into digital currency, with the European Central Bank now also fully committed to digital currency. These companies are clearing the path for countless companies to follow.

Progress is happening on the governmental side as well. By 2025, regulations for all digital assets are expected to be much clearer, and it’s likely that many countries will align their trading regulations to create inter-trading commerce regions similar to the EU.

Symbol from NEM is leading the way in regulatory compliance on blockchain with customizable restrictions built into the protocol. This feature allows token issuers to create tokens that have automatic trading compliance programmed into them. For example, if a jurisdiction requires a holder to have KYC approval for a stock token, that token is created so that it cannot be sent to any account that isn’t KYC approved. KYC as a service is already available, and will become easier and more widespread by 2025.

The other major roadblock is technology. Networks that can support many tokens are currently too slow and expensive to handle a level of traffic needed for equity and commodity markets. Those that do have high throughput tend to be less decentralized, with small numbers of attackable validators.

Symbol helps solve this problem with its built-in asset features. Instead of paying for execution of a token smart contract on a network like Ethereum, you simply use a dashboard to define asset features that are already built into the Symbol protocol. This makes asset trading on Symbol highly cost effective, secure, and fast, while remaining highly decentralized. Symbol is built for high throughput trading.

Anything that has ownership records can be tokenized. Companies have already tracked real estate transactions and other property ownership with digital tokens. Car titles are likely to follow suit. By 2025 it will be common to have other revenue-producing assets tokenized, such as mortgage-backed securities and other financial instruments. A mortgage issuer can sell a token representing the right to claim all future loan payments on a specific loan or tranche of loans.

STOs are company stock offerings tokenized and traded on blockchains. While a few have already been issued in limited jurisdictions, once there is sufficient progress on the regulatory and technology issues mentioned above, we can expect this category to explode worldwide. This is possibly the single-most anticipated use case for digital tokens since it potentially opens up a new world of easily-traded investments for buyers and vast new sources to raise business capital for issuers. It also cuts out massive third party fees.

As mentioned earlier, CBDCs (Central Bank Digital Currencies) are proving very interesting to governments and Central Banks. They allow governments to have greater tracking of commerce, tax enforcement, and reduced black markets among many other benefits. Over 80% of governments have announced they are currently researching CBDCs, and 20% have stated they plan to release one within the next 6 years.

Verified records can open capital to the unbanked

Banks will be a critical part of the future digital marketplace, but it’s estimated that 1.7 billion adults have no access to banks. The asset-tracking capabilities of blockchain in conjunction with the digital marketplace will enable decentralized networks to provide many benefits of banks to the unbanked through DEFi (decentralised Finance) which democratises finance, bypasses traditional banking institutions and opens up a world of financial opportunities – and risk – to individuals.

Trading a paperclip for a house

There was a well-publicized story from 2006 about an enterprising man who traded a paperclip for a pen, the pen for a doorknob, and so forth, until after a dozen or more trades he ultimately traded for a house. It was a bit of a publicity stunt, but it demonstrated how trading assets in rapid series can create value quickly.

The problem is that with each trade, it’s unknown whether the newly acquired asset will go up or down in value, or if it will be possible to find a party to take the other side of any given trade.

One of the most powerful features about Symbol is multiparty trustless swaps, meaning, with Symbol, you can natively manage a three-way trade, four-way trade, even up to 25 different parties in a single transaction. The possibilities of multiparty transactions become incredible as the interconnected digital marketplace grows.

Applied to worldwide markets on a large scale, multiparty swaps would allow multi-stage paper clip-to-house trades that wouldn’t execute until all the trades are locked in and guaranteed. So extending the analogy, you could theoretically trade your paper clip directly for a house without any risk of the intermediary trades. Imagine software that searches for several trades in stages. For example, 10 Hotel Points trade for 2 Loan Payments, then 2 Loan Payments for 200 Game Credits, then 200 Game Credits for 30 Stock Index Futures. The great part is that you never have to take possession of the intermediary assets. They are all delivered directly to their assigned parties as one transaction.

2025 is likely to see data-driven services that find the best multi-threaded trades like these and offer them as a single packaged trade. Trade anything for anything in multi-stage multi-party aggregated trades in which you may not even see the intermediary assets. The possibilities are mind-bending, and Symbol will be leading the way.