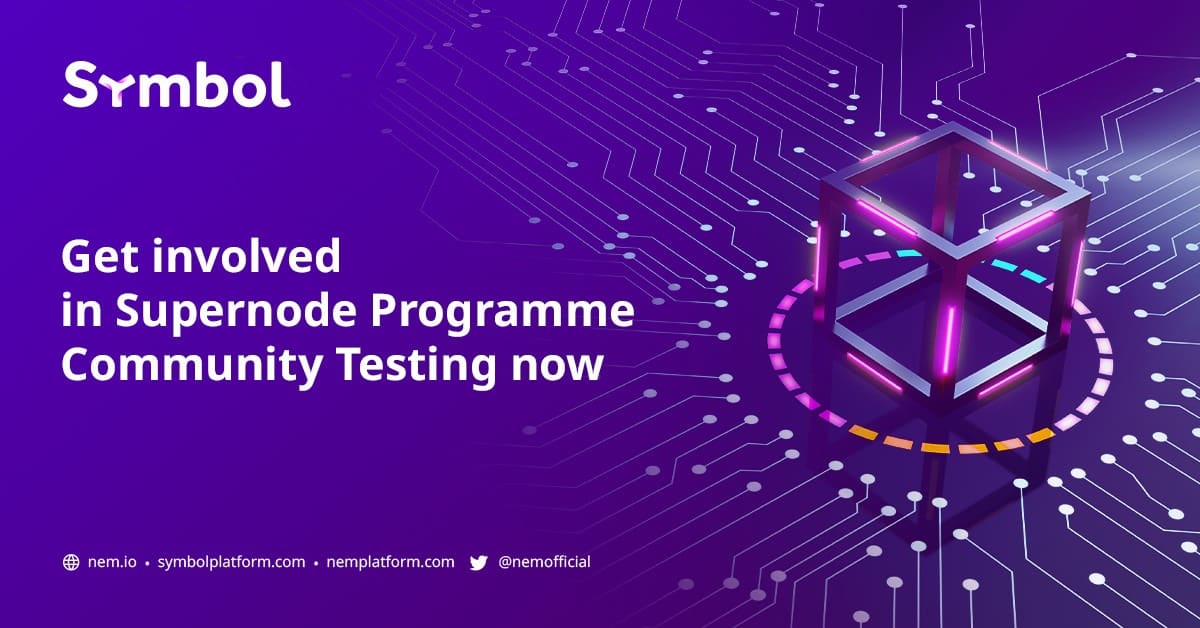 In March, the NEM community, supported by the NEM Group, launched a decentralized network called Symbol. NEM Symbol is a Proof-of-Stake blockchain with an innovative tokenomics model that democratizes access to rewards for securing the network. The tokenomics model was accepted by the community in a binding on-chain vote, and part of that model includes a Supernode program.

The program could not be launched with the main chain launch, and work has been ongoing since launch to get it ready. That work is now nearing completion, and we have now released it for broader community involvement and testing on Testnet.

The NEM Symbol Supernode Program is almost ready. After solving some issues, it has been tested in both the development and public Testnet environments. Alpha testing has passed — now it needs the community to help make sure that everything runs as it should in the varied environments of the real world!

We encourage all NEM community members who will be running nodes to enroll in the program on Testnet for a couple of weeks to complete more exhaustive testing and plan a launch date for Mainnet. We are making an open call for organizations and individuals to collaborate in this endeavor because the better the number and mix of testing scenarios/environments/setups involved with testing the nodes, the better the results will be for the program which will run on Mainnet for years.

Would you like to know more about participating in our open call for NEM Symbol Supernode community testing? Click here.

What are NEM Symbol Supernodes?

Since the NEM Symbol launch, our community has been keen to get knee-deep into keeping the network up by enrolling in the Supernode Program and running their own. It’s a great way to help support the NEM Symbol blockchain while earning rewards by staking XYM and validating blocks. They work similarly to NEM NIS1 Supernodes for those familiar with the program.

NEM Symbol nodes contain multiple deployment options. All nodes that participated in the consensus mechanism are considered equal. NEM Symbol Nodes can have one or more of the following roles:

While it is true that all peer nodes are equal in the network, participation in the Voting process is reserved for nodes that are of a sufficiently large stake size to be significant in securing the network — they act together in a PBFT manner to decide which blocks should be marked final and which should not. An additional network reward is set aside by the protocol to reward this extra role, and it equals 5% of each finalized block’s fees.

A Supernode is not assigned any special status in the protocol or consensus mechanisms; it is a layer two solution that rewards node owners who run nodes considered to be akin to exceptional network citizens. The nodes meet minimum performance, uptime, version, and stake conditions; this is tested multiple times every day. They provide a consistent and reliable backbone to the network and are incentivized to do so.

Check out the requirements for creating a Supernode.

The NEM Symbol Supernode Program adds additional incentive to help ensure that the network has enough reliable and resilient nodes to remain secure, stable, and performant. It does this through a layer 2 Rewards Program administered by NEM Group. The rewards are paid in the form of XYM tokens once per day.

As agreed in the community-approved Tokenomics model, the NEM Symbol Supernode reward program will last six years after the NEM Symbol launch, and rewards decrease gradually over that time. Supernodes are divided into tiers depending on the XYM amount staked, with the daily rewards split among them. This incentive program runs parallel with the regular block rewards (Fees and Inflation) that nodes obtain for producing blocks.

The three tiers are:

NEM empowers decentralization by incentivizing community members to get involved in technological development. By following some technical steps, any NEMber can get their node up and running, start validating blocks and collect fantastic rewards in XYM.

Get involved today and help us achieve a truly decentralized future!